CONEXPO-CON/AGG & IFPE 2011 are a resounding success

The mood was overwhelmingly positive at the CONEXPO-CON/AGG and IFPE 2011 expositions held March 22-26 in Las Vegas. Despite continued uncertainty in U.S. construction markets and the overall economy, industry professionals expressed hopeful optimism for a sustained U.S. upturn in the coming months, while global sales continue to be strong. 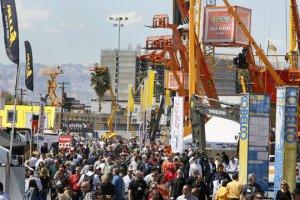 CONEXPO-CON/AGG and IFPE 2011 attracted nearly 120,000 registered attendees; the shows were the global industry gathering place for the year and the largest gathering in North America since 2008 for the construction, construction materials and fluid power/power transmission/motion control industries. The shows were held at the Las Vegas Convention Center.
Attendees said they were at the shows to examine the newest equipment and product technologies and innovations to help them prepare for future business; exhibitors cited the high quality of customers and reported strong purchases and sales leads to new as well as existing customers.
“The construction industry has been through some very tough times, with record unemployment, since the last CONEXPO-CON/AGG and IFPE in March 2008. With these positive numbers and the industry support of the shows, we’re optimistic about the future and looking forward to seeing these new sales orders fulfilled,” stated Megan Tanel, AEM vice president of exhibitions and events. 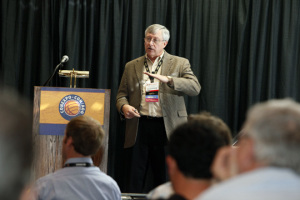 “There was such a tremendous upbeat feeling at the shows; it was really great to see our industry looking ahead with some enthusiasm after the recession,” stated Mike Haberman, chairman of the CONEXPO-CON/AGG 2011 management committee and president of Gradall Industries.
A record number of more than 860 co-located events, educational programs and pre-planned meetings were held with the shows, plus dozens more meetings scheduled onsite. Co-locations included ICON Expo for the concrete products industry and several annual conferences of national industry associations.
Quality Attendance, International Scope 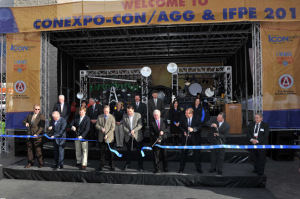 International registrations accounted for a record 24 percent of the total, representing more than 150 countries. CONEXPO-CON/AGG 2011 and IFPE 2011 were among a select group invited to participate in the U.S. Department of Commerce International Buyer Program, which facilitates the participation of international visitors. The shows hosted 42 official international customer delegations from 37 countries, organized by the U.S. Department of Commerce as well as in-country associations and related groups.
The majority of show attendees were key company decision-makers, including 44 percent with the top titles of president/owner and vice president/general manager/chief financial officer.
“The increased global participation by attendees and exhibitors underscores the importance of world markets to our industry. The U.S. economy is slowly improving and we have a ways to go, especially in construction, but after 18 to 24 months there is more pent-up demand for equipment to be ready for the upturn,” Tanel stated.
“IFPE-related markets have fared somewhat better than construction and there definitely was a lot of positive momentum and interaction on the show floor. At both shows, attendees told us this was the place they needed to be to check out what’s new and get up to speed on the latest industry trends,” stated Melissa Magestro, IFPE Show Director.
On the Show Floor

Altogether on the show floor there were more than 2,400 exhibitors taking more than 2.34 million net square feet of exhibit space. IFPE was the largest ever, and CONEXPO-CON/AGG’s exhibit space was the second largest in the show’s history.
Reinforcing the global scope of the shows were 10 international exhibit pavilions – IFPE with pavilions from China, Italy and Taiwan, and CONEXPO-CON/AGG with pavilions from China, Finland, Germany, Italy, Korea, Spain and United Kingdom.
IFPE 2011 featured exhibit pavilions from the American Gear Manufacturers Association (AGMA) and the Power Transmission Distributors Association (PTDA), as well as an exhibit pavilion which highlights the expanded presence of sensors manufacturers at the show. CONEXPO-CON/AGG 2011 featured the IT & Business Solutions pavilion, sponsored by the Associated General Contractors of America.
Educational Opportunities
Industry-focused education was an important component of the show experience, and there were a record number of education, training and certification programs offered.
CONEXPO-CON/AGG’s education program featured a record 126 sessions across nine tracks, with sessions emphasizing industry issues and trends, management and applied technology, and numerous industry training and certification programs were also held. New for 2011 were a Crane and Rigging Conference and the Green Roads Summit.
At IFPE 2011, the 52nd National Conference on Fluid Power featured a record 114 presentations, and the Innovations Theater offered 14 sessions developed from abstract submissions for the conference. New for 2011 were national conference keynote presentations from leading industry and university researchers, and sessions from the Center for Compact and Efficient Fluid Power. IFPE also offered new college-level courses.
More than 80 allied associations and groups were official show supporting organizations, coming from the U.S., Canada and more than a dozen countries worldwide. They promoted the shows’ value and brought qualified buyer groups to the events, and many helped develop direction and content of the shows’ education programs to ensure they met industry needs.
Safety, Training, Workforce Initiatives
A Lift Safety Zone focused on cranes and other aerial lift equipment and ensuring adequate ground support for the machine and load carried. In conjunction with the Crane and Rigging Conference, a Crane Rodeo promoted education and safety at the same time as providing a hands-on operational experience. These and the many certification and training programs held at the shows helped ensure a properly trained workforce of equipment operators and other jobsite personnel.
The International Mixer Driver Championship by NRMCA recognized driver skills and inspection expertise. The AEM teen-focused Construction Challenge competition presented by Volvo Construction Equipment generated interest in construction careers. The I Make America national grassroots campaign had a substantial presence to promote job-creation policies for manufacturing and construction that improve the economy and keep the U.S. globally competitive.
VIP Guests
The shows welcomed visits from U.S. Secretary of Transportation Ray LaHood as well as U.S. Department of Commerce Assistant Secretary Suresh Kumar and numerous other government officials.
Looking Ahead
The next edition of the triennial CONEXPO-CON/AGG and IFPE expositions will be held in 2014 (March 18-22) at the Las Vegas Convention Center in Las Vegas USA.
Source: CONEXPO-CON/AGG Press Room

Manufacturers and suppliers – display your products to thousands of building and design pros at ABX20, Nov 4-5. Learn more at http://abexpo.com/exhibit 📝📥💻

The Death of Diesel? 🤔
Read why manufacturers are experimenting with other means of powering equipment → https://bit.ly/2VVGatE