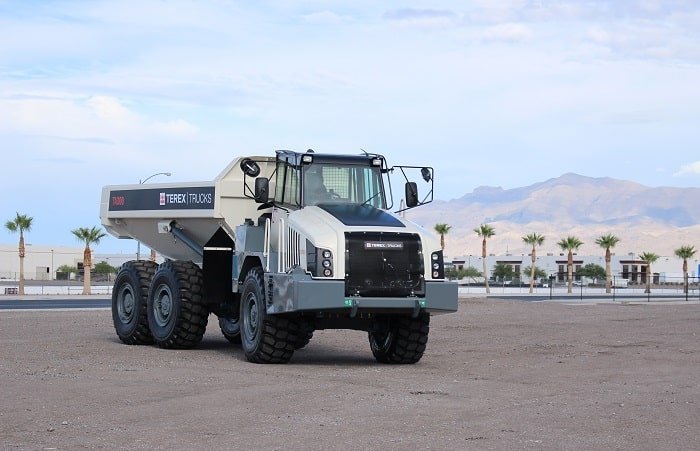 Terex Trucks’ Gen10 TA300 articulated hauler will be on display at Steinexpo (30 August – 2 September).
To celebrate the 10th anniversary of Steinexpo, Terex Trucks is attending the four-day exhibition with its newest articulated hauler, the Gen10 TA300. The 28-tonne capacity machine is set to take pride of place in booth C100 at Europe’s biggest basalt quarry near Homberg, Germany.
Masterfully crafted in Motherwell, Scotland, the articulated dump truck is made to work harder for longer in the most testing terrains. Fit for purpose in a number of applications ranging from quarries, infrastructure developments, and commercial construction projects, the TA300 features an enriched operator environment and sophisticated engine enhancements.
The EU Stage IV emissions-compliant machine is the second product to be launched by Terex Trucks since its acquisition by Volvo Construction Equipment. The hauler also comes with upgraded hydraulic and electrical interfaces and improved aesthetics in order to maximize uptime. The Gen10 TA300 will be showcased at Steinexpo by Terex Trucks’ official partner in Germany, Klarmann-Lembach.
From increased availability of parts to product improvements and customer focused finance solutions, Klarmann-Lembach’s team will be present alongside Terex Trucks specialists throughout the show. The experts will be on hand to explain how the manufacturer is making investments to impact the customers’ ability to maximise uptime and production efficiency.
“Steinexpo’s 10th anniversary will no doubt be an impressive event and it serves as the perfect opportunity to introduce the Generation 10 TA300 to all our German customers,” says John Mlonek, commercial sales manager at Terex Trucks.
“The new articulated hauler is well suited to various operations that are prominent in the region, and it’s essential for Terex Trucks to continue to build its reputation in such an important market. We are looking forward networking with visitors at the hopefully sunny exhibition,” adds Mlonek.